Written By: SeeMeCNC (and 6 other contributors) 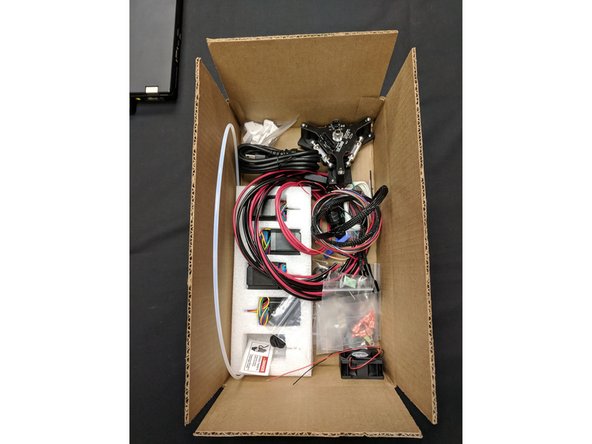 5 other people completed this guide.

I"m also asking the same question there are 3 pieces of the injection molded plastic, I assume these are for the travel arms somewhere. On a more serious note , a schematic showing the wiring for both for the AC supply and the 12VDC circuit for bed...I will be departing the build guide. to install a proper fused 3 pin AC connector used in the V4 edition. ALso am not a keen fan in replacing the duet board ,should it fry and will use a sSR to carry the load for the bed heater.. An index of the various steps with links to the departure point if this ”kit” had arrived from China, my comments would have been much more critical;. Good thing mine was the second last one , as far a s I know. Definitelly not for a Newbie

What are the small black plastic injection molded components for? They have a slot on one side and an open crescent on the other.

I agree with other comments about adding a list of tools and materials as well as the small font on the bags being VERY difficult to read. Parts bags were grouped by physical orientation (bottom plate, etc.), but assembly instructions jumped around enough that multiple bags were open at the same time. It would be more helpful is bags corresponded to instruction steps. Or maybe assign numbers to bags and then each step can note what bag(s) to pull hardware from. I also had a decent amount of hardware left over when done. So throughout the build I wasn’t sure if I had missed assembling something or if having extra was normal. I do appreciate having some extras. Lastly, my printer powered up and printed on its first try without me having to debug or fix any issues (other than trimming off extra belt on carriages). So that is a testament to the quality of the instructions.

I would suggest moving the motor mounting, and belt routing to be done BEFORE mounting the duet panels, duet, and side plates as this allows MUCH easier access to the screws for final tensioning of the belts. Unless using a stubby screw driver the side plates especially get in the way to access 2 of the 4 motor screws for final tightening.

The inventory list font i also would suggest increasing. This became the biggest issue since being such fine font size, i couldnt make a quick inventory and realize that one 84407 plate was missing before i started a 13 hour live stream build of the Rostock.. Didnt look good for SeeMeCNC to end up short a part on a $1000 kit. Even if just numbered the bags instead of individual parts lists in them, with a corresponding full page print out of what each numbered bag contains.

I’d like to suggest adding a list of all tools and materials needed to complete the assembly at the beginning of the guide so that they can be gathered ahead of time.

I’d also like to suggest adding a list of all components/component bundles/bags that should be received with the kit so that an inventory can be done before assembly. Additionally, a printable or online viewable list of the contents of each bag (in a larger than 2 point font) would be helpful as well so that items can be accounted for.